Skip to main content
Home / Resources / The Tons of Plastic that are Still to...

The Tons of Plastic that are Still to Come

Media coverage has turned "plastic" into a dirty word, but it is a material that is in millions of homes across the world, and appears in the daily routine of millions more people. Single use plastics in particular have come under scrutiny, as awareness has increased on the level of plastic waste in oceans, and the realization of how much plastic waste China imported up until flatly rejecting to import anymore waste plastic from the world in early 2018. Now, governments have to deal with their own waste. Plastic uses the Earth’s resources from the ground, but once discarded it remains for a century. How can the waste be managed?

Governments have introduced taxes, corporations have changed materials, and consumers are re-evaluating their choices. But is banning all single-use plastic realistic? Will greater recycling mean global virgin plastic consumption will reduce?

There is a lot discussed on recycling in the mature markets of the United States and Western Europe, but is this enough? The key to successfully managing material consumption and waste, when the planet is at stake, is to understand the plastic consumption across the whole planet, and where the people are. There is a great economic uncertainty over the next century; how fast will Africa grow, and what will its plastic consumption be?

A quick web search on the terms ‘Plastics’ and ‘Africa’ directs the reader to news articles on how governments across the continent are tackling plastic waste. Bans on plastic bags in particular gain a lot of attention, and many articles report on how Africa is leading the way in banning single use plastics. Government measures across the continent vary from taxes, to punishments including heavy fines and even imprisonment.

Almost 30 countries have announced plans for some level of ban or taxation, but the success in enforcing has been mixed. Some of the notable pieces of legislation include the following:

It would seem that countries in Africa are set to easily succeed where other, so called mature economies, have failed.

In taking government action against plastics where there is scope for much greater economic development, African countries can lead the way in developing a new model of economic growth whereby a rise in disposable income and living standards is achieved with levels of material sustainability the likes of which no country has ever achieved

The Difficulty in Capturing a Moving Target

The favorite phrase in discussions like these is "circular economy" – eliminating waste by keeping materials in use or reusing them rather than consuming finite resources. Transitioning to a circular economy is difficult for any economy to achieve.

But for an "emerging market," a circular economy is made difficult to plan for and achieve, because the level of waste recycling required has the potential to vary enormously.

There is so much scope for economic development, and there are so many millions of the world’s population currently consuming just a fraction of the amount of plastics of other countries, that just a small change in consumption per capita projections can mean a significant increase in plastics consumption. Such a moving target makes it difficult to plan for, coordinate and achieve a recycling infrastructure that will be "enough."

As plastic materials can be composed of many different types of polymer, let’s look at the largest polymer market: polyethylene. 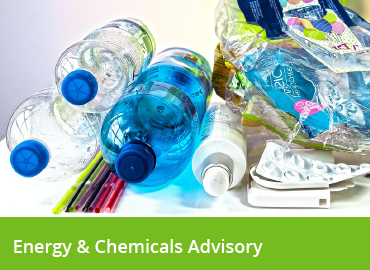 Municipal Opportunities for Plastic Converters in the GCC Healthcare Industry

Looking for more information on Resource Innovations Software or Services?
Talk with an expert